Both SMB and NFS are network protocols of the application layer, used mainly for accessing files over the network. Since SMB is supported by Windows, many company and home networks use it by default. I will show you a basic benchmark based on read and write operations with both protocols.

The NAS device will be the target for read and write operations. It has a hard disk with a transfer rate of around 150 MB/s. All devices are connected over LAN. The NAS device is linked to FritzBox with 1000 Mbit/s. The bit rate between PC and FritzBox is set to 100 Mbit/s.

Enabling NFS and SMB in a Synology NAS (DSM) is done with a few clicks. As you can see below I have restricted read and write access to the network segment 10.10.0.0/24, which allows the access to a total amount of 254 hosts. You might split your network segment into two regions. The upper hosts might get read access whereas the lower hosts might get additionally write access. Just play around and find the configuration which meets your requirements. 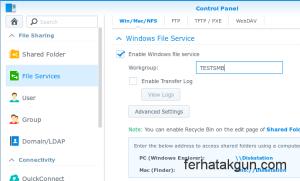 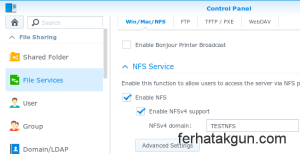 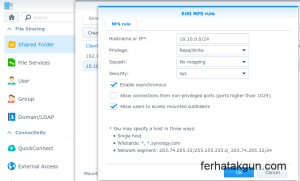 Read and write access for hosts on a network segment 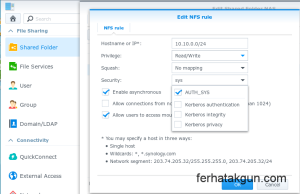 Kerberos is an alternative security setting

In order to mount network shares you need to install the packages cifs-utils and nfs-common.

Create folders inside /mnt (e.g. /mnt/smb and /mnt/nfs) before mounting. With the following commands you will mount an SMB share into /mnt/smb and an NFS share into /mnt/nfs. For testing purposes manually mounting is enough. Later on you can replace this step with an entry inside /etc/fstab to mount your shares during startup.

The SMB share can be mounted without any additional Software. The line below mounts the SMB share to drive X:\

If you own a Windows 7 Ultimate or Enterprise license, you can turn on Services-for-NFS inside Windows-Features. Others need 3rd-party software to access NFS shares. To be honest, accessing NFS is horrible if you don’t own the correct windows license. It’s not as easy as in Linux or Mac OS!

A solution, which is offered by the University of Michigan is only usable in TESTMODE. The provided driver is not digitally signed!

Every test was repeated three times. The results were rounded up or down.

After each read test the local cache must be cleared. Otherwise the measurement will be wrong.

As you can see NFS offers a better performance and is unbeatable if the files are medium sized or small. If the files are large enough the timings of both methods get closer to each other. Linux and Mac OS owners should use NFS instead of SMB. Sadly most Windows users are forced to use SMB.

This site uses Akismet to reduce spam. Learn how your comment data is processed.