Mounting local drives in Linux during boot up is straight forward. But when it comes to mounting network drives, it can lead to increased boot up times.

After installing and configuring Kubuntu 15.10 from scratch, I have recognized a remarkable increase of my boot up time. Due to an existing Bluetooth bug, which was introduced in 15.10 and caused some delays, I have ignored the boot up delay for a while. After patching this bug, the delay still occurred. So what was the actual reason?

Since 15.04 systemd is part of Ubuntu, which provides a built-in boot-charting. Systemd-analyze is used to inspect system start-up. Running sudo systemd-analyze plot > bootchart.svg from terminal creates in a timely manner a graphical output of your last system boot-up. 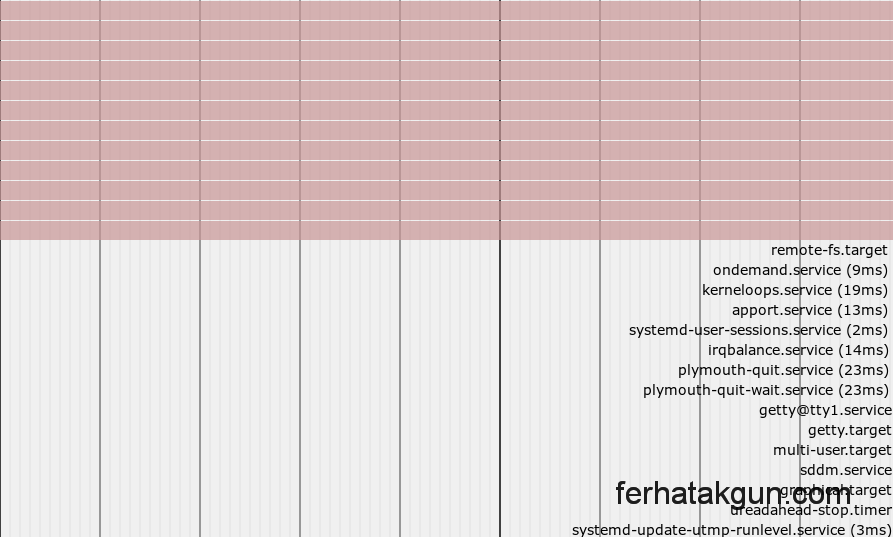 Due to the large time line I had to shrink the above graphic. The horizontal red bar above remote-fs.target belongs to sys-devices-virtual-net-vmnet8.device. Looking at this output shows me that the delay is either caused by a virtual device of VMware Player or the mysterious remote-fs.target. I had a gut feeling, so I started looking at the last-named one.  Running systemctl list-unit-files | grep remote-fs.target shows that this is an enabled unit of systemd. Based on the used name, I proceeded on the assumption that it has something to do with remote file systems.
To get more details systemctl list-dependencies remote-fs.target is necessary, which shows a bit more info about this unit.

Bingo! I remember that after installing my system, I have updated /etc/fstab to automatically mount an NFS share. Uncommenting this line in /etc/fstab and repeating the bootchart analysis showed a significant difference. The new boot-up time took around 11s instead of 100s.

An alternative to mounting devices during boot-up is to mount them only when you need them. A program called Autofs makes this possible. Install it with sudo apt-get install autofs and edit /etc/auto.master. Insert on top of this file the following line: /mnt/nfs    /etc/auto.network --ghost

This will mount the remote network drive into /mnt/nfs. Create the folder /mnt/nfs and the file /etc/auto.network, which is referenced above. Add each NFS drive you want to mount into a single line.

Using the –ghost parameter inside /etc/auto.master will create ghost folders e.g. /mnt/nfs/MyShare. Entering these ghost folders by terminal or using a graphical file browser, will lead to an auto mount in the background. The mounted shares will be automatically unmounted if they are not in use and a specific time has passed.

This site uses Akismet to reduce spam. Learn how your comment data is processed.